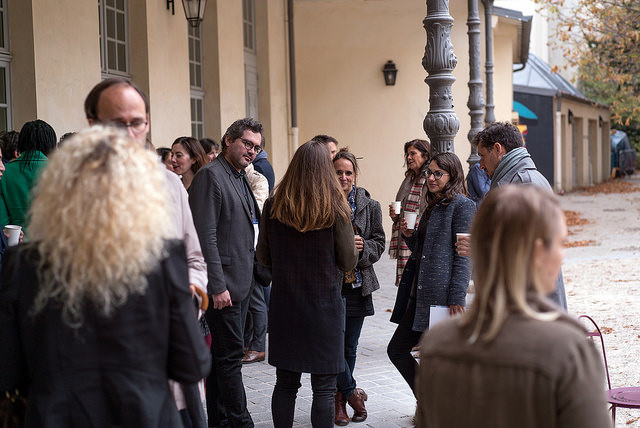 A Conférence des Plumes: the most successful Anglo-French collaboration since Concorde?

Could it become the most successful Anglo-French collaboration since Concorde? Brian Jenner discusses the launch of a network of French speechwriters.

On the 26 October 2018, the first ‘Conférence des Plumes’ took place at the Centre Cultural Irlandais in Paris. A ‘plume’ is a ghostwriter or speechwriter.

For me it was a very satisfying day. I studied French at university between 1987 and 1991. I spent one year living in Strasbourg, but I’d never been able to use my foreign language skills as part of my job.

However, since 2009, I’d been organising events for the European Speechwriter Network. We’d had 17 conferences. Delegates came from Germany, the Netherlands and Denmark, but, with the exception of a handful working in international institutions, the French didn’t come. And, unlike the Germans and the Dutch, they had no professional network with which I could build a relationship with.

Out of the blue one day I was called up by a French journalist writing an article about speechwriting. He made a note of my lament about the French and published my thoughts in his article. I then got an email from Hélène Faure, a speechwriter who worked for Manuel Valls, the former Prime Minister of France.

I invited her to attend a European conference, and then I asked her to speak. She did a brilliant presentation in Leuven in 2017. You can listen to it here.

Hélène introduced me to some of her colleagues and I suggested a conference in French. In May, I went to Paris and found a venue.

We invited people to speak quite randomly. We sold tickets on Eventbrite. I thought we’d get 20. We got 40.

The quality of contributions was outstanding. I learnt how one corporate speechwriter used to write 70% in French, 30% in English in 2012. Now it was 70% in English and 30% in French. I heard about the way things work a Disneyland Paris speechwriter, a woman who has set up a school for novelists, how a freelance got a job with one of the top executives in the world and how a former professional tennis player became a speechwriter.

Two other Brits joined me to support the conference.

I came to two conclusions. The first is that there is a community of committed speechwriters in France. And secondly we’ll host a European Speechwriter Network conference in Paris in autumn 2019.

If you’d like to find out more about La Guilde des Plumes, you can go to their Facebook page here.