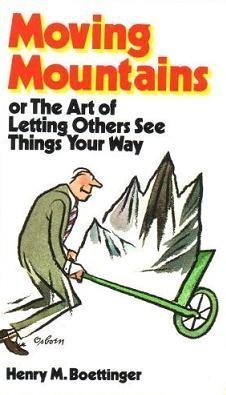 Henry M Boettinger worked for the American Telephone and Telegraph Company. He wrote a book Moving Mountains or The Art of Letting Others See Things Your Way published in 1969. It’s regarded as an obscure classic on the art of giving presentations. Here are some soundbites from the book:

Everyone subjected to a presentation brings with him several unseen retainers. Kipling called them his ‘six honest serving men’: Who, What, Where, Why, How and When?

Start where THEY are, not where YOU are.

Presentation of ideas is conversation carried on at high voltage — at once more dangerous and more powerful.

How to get and hold attention or creating sleeplessness

My nine-year-old daughter was once assigned the task of making a report on the Aztecs. Her teacher told her to ‘do research on it first’. Since she was only nine, she lettered in a fine title on the cover sheet: History of the Aztecs. Were she 29, and an expert on the subject, she would concoct a title like, Some Preliminary Notes on Aztec Grain Cultivated in the Period 1316-1319AD and take 500 pages to do it.

Uncomfortable chairs are tough opponents; they always win in the end, when the presentation is too long.

Create a clash between the background environment and the event.

Every renowned figure in history…understood the power of drama. Churchill’s speeches – uttered word for word by a phlegmatic predecessor – could not have inspired and rallied an entire free world. Sir Winston was a consummate, and not altogether unconscious, showman.

3 Comments on A Henry Boettinger Masterclass