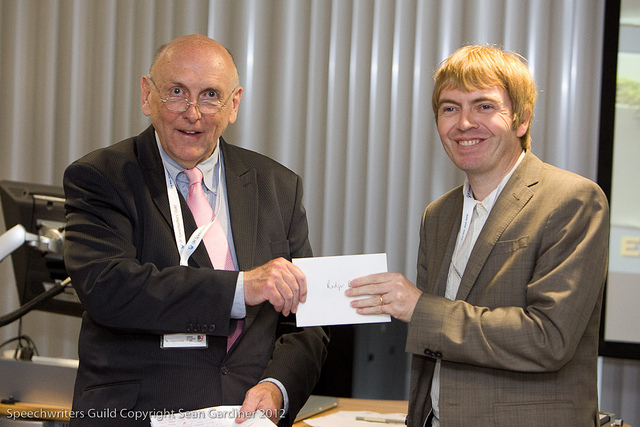 We heard over the weekend that Fred Metcalf died last month. You can read an obituary of him here.

I first came across Fred through his book of humorous quotations and jokes, which were published by Penguin. They were very useful for writing birthday and wedding speeches. I knew he worked as a speechwriter because he’s mentioned for writing great lines for David Frost in Bob Monkhouse’s book Complete Speaker’s Handbook.

At one of the first UK Speechwriters’ Guild conferences he was mentioned by Tim Heald and Edward Mortimer as being someone who had become a recluse. It wasn’t easy to track him down as he didn’t have a website or anything like that. But track him down I did, near Limoges in France. He was very willing to speak at our conference in Bournemouth in 2011.

We didn’t really know how he’d go down. He was allocated the pre-lunch slot – which is for humour. He brought the house down, and became the first speaker at the UK Speechwriters’ Guild to use the f-word (only clergymen speakers have used it since then).

We had him back to chair the conference in Bournemouth in 2012 and to speak in Brussels in 2013. You can hear him introducing a speech about Hitler’s rhetorical techniques here. Our audience has become gradually more multinational, so some of Fred’s more outlandish gags were lost on them, but he was appreciated very much. He went on to write a series of books of quotations for Biteback publishing.

I remember a lady called Sally Poplin was quoted quite regularly in his books. I asked him who she was. He was a bit evasive, which suggested to me that he was Sally Poplin. That’s a great way to quote yourself in your own books of quotations.

As a tribute to Fred, we’re republishing the interview we did with him in The Speechwriter. 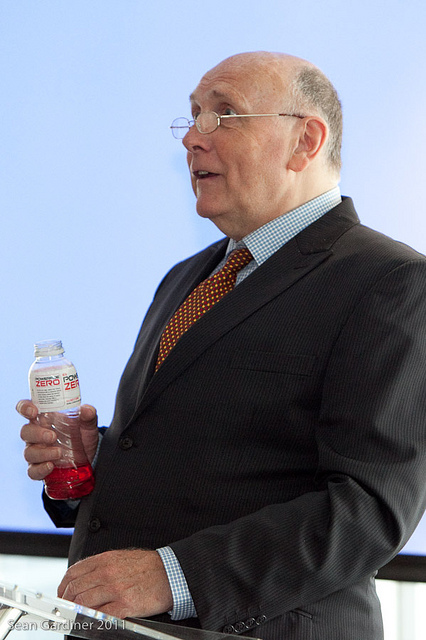 What was the first speech you ever wrote?

I met David Frost on a TV show where I was working as a writer and he said he needed some jokes for a corporate speaking engagement. It was for pharmacists and he needed some jokes on that topic. I managed to find some. Ever since then I’ve become used to being a specialist for one day only.

What did you study at university?

I haven’t been there yet. But one more GCSE and I’ll be packing my bags.

When did you start collecting jokes and quotations?

The day before David Frost’s speech for pharmacists. When I began my career there were about two anthologies of jokes available in print. I was working on a TV programme and I used most of the good ones in the first week, then I bought the companion volume, which I used up in the second week. After that, I realised I had to learn to write my own.

What font/layout do you use for your scripts?

How did you start writing full-time for David Frost?

I was in Manchester working on a show for John Birt – the future DG of the BBC. Frostie moved down to London and we had a football match between the Frost Report and a team from an arts show called Aquarius. We won 3-2 and I scored two goals and fed David the third. He said, ‘I like your style, Fred’ and we began work together on a long-term basis. My writing skills had nothing to do with it, it was all about goal poaching.

Which comedian/politician do you admire the most?

Barry Humphries is the greatest standup comic of his generation. He’s planning his farewell tour for Dame Edna and Sir Les Patterson in the autumn. Don’t miss it.

Daniel Hannan made a brilliant speech in the European Parliament about Gordon Brown, which was an instant YouTube hit. He’s also made speeches in Spanish. He’s an Atlanticist who loves Europe, but doesn’t want to be ruled by it. He gets my vote.

What’s your favourite speech in a film?

The local doctor’s graduation speech in Carousel about courage and keeping your faith. I’m always reduced to tears when Billy Bigelow comes down from heaven and says to his daughter, Louise, ‘Believe him, darling. Believe’.

What did you think of Bob Monkhouse’s style of telling jokes?

I never met him, but he did recommend me. His joke: They laughed when I said I was going to be a comedian, they’re not laughing now – was one of the best.

Do you enjoy performing your own material?

Rodale’s Word Finder – published in 1947. It’s a great big 1300 page brick of a book, listing adverbs which go with verbs (forty ways of laughing, for instance) and adjectives that go with nouns (two hundred ways of describing a book). How Mr Rodale and his staff produced this in 1947 before computers, can scarcely be imagined. But it’s the book I would want to rescue if the house caught on fire.

Do you miss England living in France?

Some nights in England, you can have an M&S biryani curry with a crisp new glossy magazine from WH Smith. Unfortunately this is not a pleasure available in the French countryside. You’re reduced to nibbling what’s left of that morning’s baguette rustique, while checking out the livestock prices in the local paper.

Dr Max Atkinson’s Contribution to the World of Speechwriting

3 Comments on A Tribute to Fred Metcalf