How should we interpret Zelensky’s speeches? 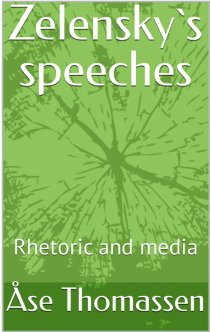 This is a live online discussion between Brian Jenner, founder of the European Speechwriter Network, and Norwegian political scientist, Äse Thomassen.

The conversation will last 35 minutes and will be followed by questions and a discussion with the online audience.

President of Ukraine, Volodymyr Zelensky, has blazed a trail making speeches in Parliaments around the world.

He has built solid international support for the defence of his country after Russia invaded on 24 February 2022.

President Zelensky’s rhetoric has secured the sympathy of Governments around the world. He has won commitments to supply arms as well as pledges that he will get valuable assistance from the European Union and NATO.

The speeches have also encouraged many people to back Ukraine by taking in refugees, flying flags and supporting the struggle against the Russians on social media.

In it, she asks the question whether Zelensky’s communications’ strategy is likely to lead to a good outcome for Europe.

What is he trying to achieve? How successful was he as a politician before the invasion? How much of what he says is propaganda?  Thomassen examines his background as an actor, and how this influences his ability to deliver powerful messages.

Join us for a lively discussion about how speeches and speechwriting continues to define the way we live in the C21st.

This is a free event, but please do register for a ticket on Eventbrite.

I picked up a lot of useful tips on making my speeches more interesting and appealing to the audience. It also put across the importance of writing for speeches in a different style to writing reports. - Unison delegate

We thoroughly enjoyed ourselves and it was very, very helpful. - Lorraine, LibDems

All attendees and participants felt it was extremely useful and has improved their understanding and skills. They also thought Alan was an excellent trainer. - Simon, Westminster City Council

One of my team came along and found it incredibly useful, I'm looking forward to taking part on the 16th! - Union Official

Just wanted to drop a note to say how fantastic, informative and enlightening the session was last week. I sat there thinking to myself that I could improve on my speaking skills. Thanks again Brian. Just thought I will share this with you. - Anita, Bournemouth University

I've learnt many new techniques and I now have the tools to actually articulate what works and what doesn't and why. - Scrutiny team member, Greater London Authority