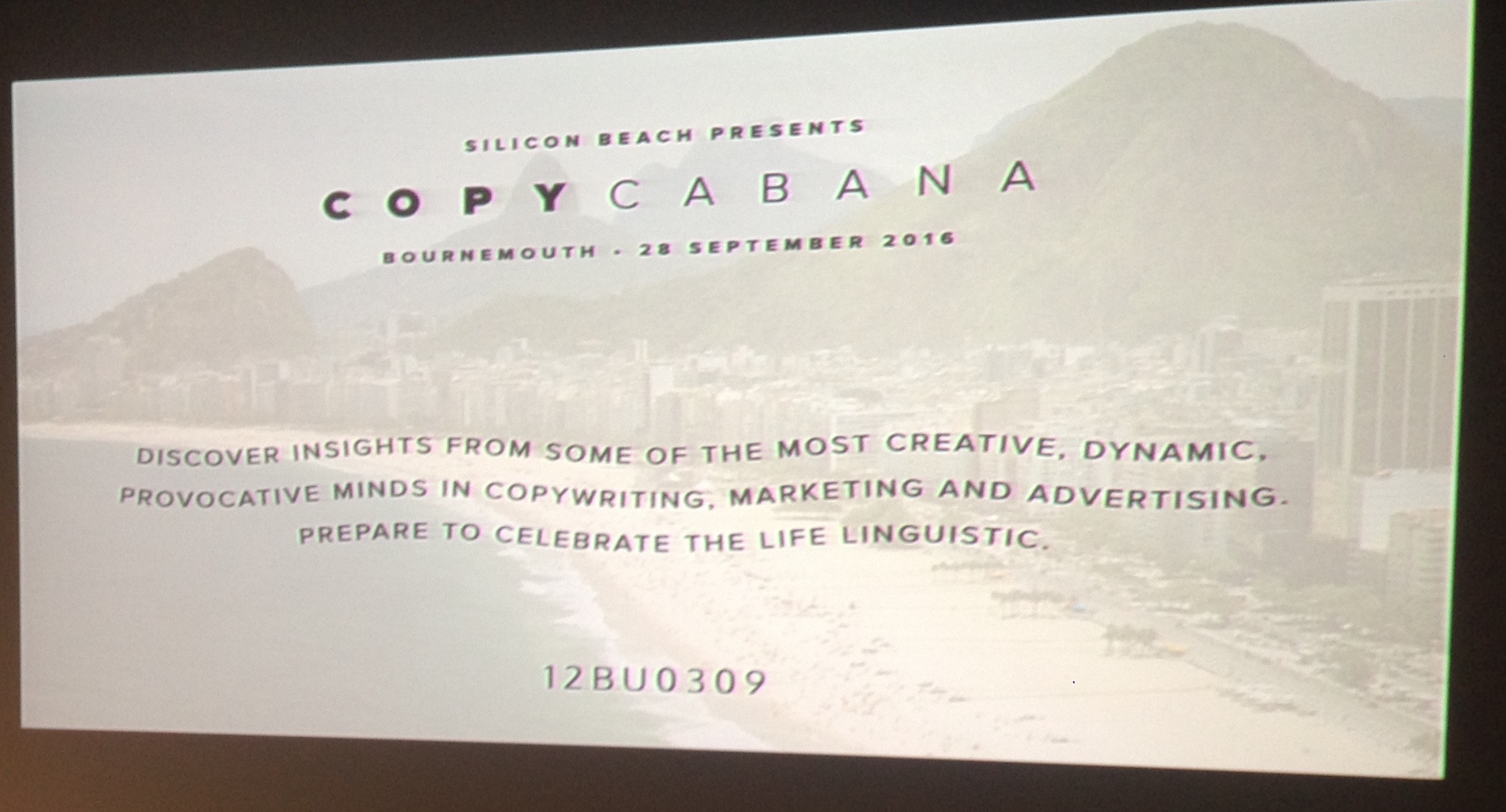 On the morning of Copy Cabana 2016, a colleague of mine said there were three things you could expect at a writers’ conference.

You’ll hear a speaker tell you things you already know in a boring way and it irritates you a lot.

You’ll hear a speaker tell you things you already know, but in such a way as you love hearing it again.

You’ll hear a speaker tell you one or two things you didn’t know, in such a way that you remember them, and they change the way you do your work.

As the organiser of 14 writers’ conferences in the past, most of them for speechwriters, I was intrigued to attend a big conference for copywriters in my home town of Bournemouth.

The Copy Cabana team didn’t believe in publishing a programme or a delegate list.

It was supposed to start at 9am but to my relief, that was the welcome teas and coffees. We got a bulging goody bag with pencils and books. The breaks lasted for ages, which gave plenty of time to meet other writers.

The other surprise was that there were 170 delegates. Surely that’s all the professional copywriters in the whole of the UK?

At the speechwriters’ conference we always like to have a speaker who represents the mystical power of words – a preacher or a humorist.

Copy Cabana covered this with the first speaker, Deanna Rodger, a performance poet. She weaved some delicate webs with words and delivered her presentation using beguiling gestures. It worked a treat. Everyone was paying attention.

Nicole Dempster, head of internal communications at ITV, then brought us back to corporate reality. She explained how to get  employees to live the brand – and these days that means getting them to tweet and get involved in themed days.

Next up was, for me, the speaker who was unforgettable. Miles Carter did the John Lewis #manonthemoon advert. He was funny and his first piece of advice was ‘Be the brand’. He illustrated this by showing his advert for Mulberry. He explained how it worked for the wealthy people who bought Mulberry.

Then he outlined the process of writing the John Lewis ad. He started off with dozens of scripts. They were fine. He then repeated the familiar mantra – know your audience. Mulberry is a small audience, blockbuster movies have a big audience. He showed that the bigger the audience, the dumber the jokes.

This is a problem that also applies to speechwriting. If you’ve got an audience of 200 people, I tell my clients, you can’t make subtle jokes.

He talked about creating emotion. He used the heading, ‘do you feel anything?’ – which he wittily summarised as ‘is it in yet?’ He started off by saying ‘don’t use death’ – it’s a cheap way to do it.

With the John Lewis ad, he focused on the fact that his grandad was going to be alone at Christmas that year for the first time because his partner had died. His partner also had a grandfather facing the same problem. They channeled those emotions. First came the emotion and then the ad.

We have speakers emphasise the importance of emotion at our conferences for speechwriters. We usually focus on the text first: Miles made me see that may it’s best to start with the emotions.

Having made the case for empathising with loneliness, he punctured it rather skilfully by telling us a story. One of the special moments in the ad is when the French actor, Jean Masini, gives a radiant smile. They asked him how he did it.

He said by remembering the joy he felt when he decided to divorce his wife after thirteen years.

Be Wary of Speakers Who Don’t Stay

After Miles, we had two ladies who had arrived 5 minutes before they spoke and then left 5 minutes after they spoke. Superstars can just about get away with this, others can’t. The fun of a conference is shared presence. If you really like a speaker, you can chat to them in the break.

These ladies didn’t give themselves time to get the measure of the occasion. They didn’t make their presentation relevant to the theme of the day or the audience. It spoilt their message.

As a conference organiser, you need a bad session because it shows how brilliant the best ones are.

Pete Caine picked up and, in an aggressive and gentle way, told us the story behind his best ad for Carling. He reminded me that our world is constructed on ideas.

After lunch we had one of the great sages of advertising, Drayton Bird. He stood up and swore a lot. But he did pepper the swearing with lots of apothogms about copywriting.

Ask for a reply three times.

The biggest mistake in management is the failure to train.

Gem-like apothegms, as I said.

The tone shifted after Drayton. Debbie Coats, a nurse and clinical information manager at Cancer Research UK,  gave an account of the challenges web copy writers face when writing about cancer. It’s important to not be flippant, but it’s a scary experience for patients and family to read the symptoms. How do you take out scientific jargon? She gave us examples from the website.

After the afternoon tea break came sparky Caitlyn Breeze from Saatchi & Saatchi. She was engaging. She quoted Julius Caesar, Byron and a long passage from Virginia Woolf.

This was comforting. In my 20s I also studied literature at a top university. I also thought that everybody could  relate to that stuff. In my 30s, I got over it. (Forget Saatchi’s: go to Toastmasters, Caitlyn. They’ll turn you into a real star).

Next up was word masseuse, Hayley Redman, from innocent drinks. She told us how they work their copy magic.

We heard how hard it is to write witty captions in Finnish.

The struggle to get the factory to replace ‘use before date’ to ‘Enjoy by…’ and the saga of the 4th floor stapler.

My jaw really dropped when I heard their greatest trick of all: they charge £4 for a small bottle of squashed fruit in Starbucks.

Finally, Mark Beard came on as the walking embodiment of The Economist magazine.

They identified a solution: create a profile of the readers and work out where they are.

It was sober, systematic and smart. They use cool lines to create clickbait and remind people that the magazine is not just about global finance. Like, Nicole Dempster, earlier in the day, just by telling us what they’d done, I found myself thinking differently about my own business and how I could do things differently.

Overall, I loved the conference. My only concern was the links. Speechwriters don’t believe in unscripted communication: copywriters shouldn’t either. To say, ‘That presentation was ‘effing brilliant” after each contribution was lame.

We’ve only every had the use of the f-word twice in 12 conferences of the UK Speechwriters’ Guild. Once from preaching expert from the Church of England, and the other time was from David Frost’s speechwriter, Fred Metcalf. We’re linguists, we watch our words.

I came away with lots to think about. Several strategies for my 2017 business plan. A few new acquaintances. A few book recommendations. Some sharp new pencils. And more evidence that attending conferences is an essential way to grow and flourish as a writer.

They’ll be back next year CopyCabana