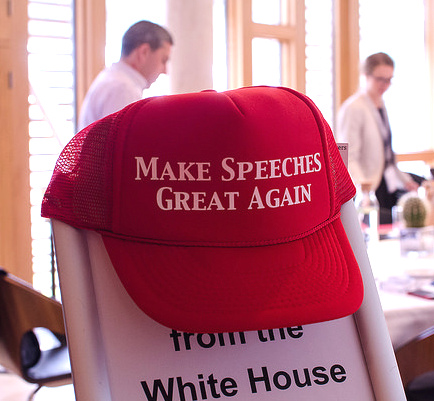 The 16th conference of the European Speechwriter Network (including the UK Speechwriters’ Guild) will take place at King’s College, Cambridge from 11-13 April 2018.

Speechwriters who have worked for the Dutch, Swedish and British Prime Ministers will be among the speakers. And Stephen Krupin, a speechwriter from the Obama White House, will be delivering the closing

Also on the programme: a rabbi from Pittsburgh and an improv artist, who writes speeches for the European Commission.

The conference stretches over three days. The first day is spent at pre-conference training followed by the main conference which lasts until Friday lunchtime.

Among the pre-conference training sessions will be a workshop on ‘Hard-earned speechwriting lessons from the US presidential campaign trail – How to sleep in your suit, know your sports teams and not miss the motorcade’, delivered by Lindsay Hayes, who has written speeches for former US Vice-Presidential nominee, Sarah Palin.

On the Thursday evening, there will be a banquet with an informal public speaking competition for delegates. For the first time, the winner will receive the Fred Metcalf Award – a tribute to David Frost’s former speechwriter who died last year.

The European Speechwriter Network attracts speechwriters from Governments and organisations. It promotes exchange of ideas and informal contacts.

Organiser, Brian Jenner, said, ‘This is a challenging time for those who yearn for tact, elegance and diplomacy in public life, but we’ll continue to champion those values.’

Tickets are available at www.ukspeechwritersguild.co.uk

 Three European Prime Ministers and a US President will not be speaking – but their speechwriters will
Copyright © 2022 UK Speechwriters' Guild. All rights reserved. Website by Europa Studio.